The Future of Growing May Be Closer Than You Think

One of 2015’s biggest films was Ridley Scott’s “The Martian.” The film was released in September – perfect timing for garnering award season attention – and features Matt Damon’s character overcoming the desolation of life alone on Mars, in part, by growing fresh, edible plant matter. The film was well received by critics and audiences, and the Hollywood Foreign Press awarded it the Golden Globe for Best Motion Picture Musical or Comedy – which still seems strange weeks later, as the laughs are few and the musical numbers are nonexistent.

While the cynical moviegoer would probably view the film’s growing scenes as improbable, NASA actually has grown and is currently growing edible plants in space, albeit using much more practical and researched techniques, and they just finished an experiment on producing flowering plants in space. Back in August, astronauts even harvested and consumed red romaine lettuce aboard the International Space Station. A few weeks ago NASA released an article on their Tumblr that explained how the growing systems used on the station functioned, and it was surprisingly simple and similar to growing on Earth.

Veggie – An Advancement in Extraterrestrial Growing

Producing healthy plants in space is obviously difficult. The weightless environment makes it impossible to keep water, soil and other media from floating away and also causes the plants’ roots to grow in all directions. To combat this, NASA grows using a system called Veggie. Veggie is a collapsible and expandable vegetable growth chamber that is modest in size and emits a pinkish light from the red and blue LED lights that are used for photosynthesis. Within the Veggie system are what NASA refers to as plant pillows, which are the devices used to combat the effects of weightlessness. 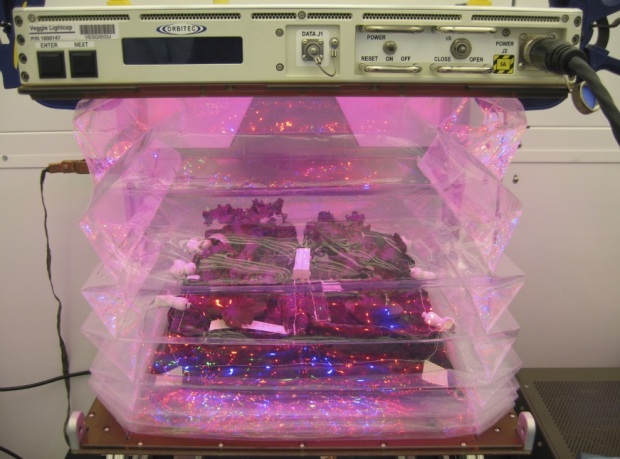 The plant pillow, which is similar in size and shape to a pillow used for sleep, holds the soil and water together, so that the plant’s roots have a healthy and stable growing environment. Each pillow has a thin slot on top, and in the slot two wicks are placed. The wicks look similar to paper towels, and they hold the seed in place. Keeping the seed in place is essential, because it ensures that the roots grow straight down and not in all directions. By directing the roots down, the wicks also ensure that the plant is propelled upwards, eventually breaching the pillow’s slot where it can receive light. The wicks also pull water from inside the pillow, providing hydration to the growing seed. 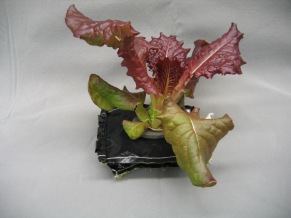 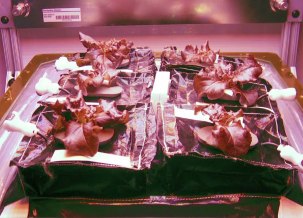 This system has proven effective, and has provided astronauts in space with a nutritious food source. The first plants that were harvested were brought back to Earth and given a microbiological food safety analysis. Nothing out of the ordinary was found, and the astronauts now use wipes that utilize citric acid to clean the plants before consumption.

What’s the Next Step?

The ability to continuously produce edible plants in space is seen as an essential factor for sending manned missions throughout the solar system and traveling into deep space. The Veggie system is now used approximately 250 miles above the Earth’s surface, but eventually this could turn into an interplanetary or intergalactic growing system.

NASA plans on continuing growing experiments. The study completed a couple weeks ago used zinnia flowers, a vibrant flower that is native to Southeastern America, but it wasn’t conducted to provide aesthetic improvements to the sterile space station – this was just a bonus. It was actually the first step in experimenting with flowering vegetables, which will hopefully lead to extraterrestrial tomato production. In fact, NASA plans on growing actual tomatoes aboard the International Space Station in 2017, but in the mean time astronauts will introduce cabbage to the Veggie system and continue to study lettuce production.

The International Space Station will also be used in a similar fashion to the Growers Supply grow rooms. Astronauts will test how different lights affect the quality of plants in space. Currently NASA uses a combination of red and blue LED lights, mixed with some green lights to add color to the plants, and the ratios of these colors will be experimented with to find the most beneficial. A number of fertilizers and nutrients will also be tested.

As an industry-leading manufacturer of unique and versatile growing systems, Growers Supply is always keeping up with the latest technology, and who knows, maybe one day a Growers Supply system will be shot to the frontiers of space in order to nourish the pioneers of the 21st century.