Meyers Farm was established in 2002 and is located on 17 acres in the frozen tundra of Bethel, Alaska. Meyers Farm has been the only farm in the area carrying fresh produce, and since 2002 Owner Tim Meyers and his family have been committed to providing the highest-quality, organic produce to the Yukon-Kuskokwim Delta. Over this time Meyers has come to be known within the 6,000 person community of Bethel as the “Permafrost Farmer”, and his farming practices are all sustainable, free of pesticides, herbicides and chemical fertilizers and the farm does their best to utilize local resources.

Shortly after establishing the farm, Meyers faced the issue of delaying his planting till June due to his location in Western Alaska. Wanting to extend the growing season, Meyers decided to purchase Two Premium Round Style High Tunnels from Growers Supply.

The Growers Supply High Tunnels eliminated many of the weather issues that the Meyers had experienced in the past. Meyers and his family now enjoy higher profits and are able to start planting in April, thanks in part to the High Tunnels.  Meyers says, “It is our intention to provide locally grown produce year- round for our community in Bethel, and these High Tunnels have allowed us to do that.”

“I’ve doubled the growing season,” said Meyers, and residents of the remote Alaskan village, where 95 percent of the food is imported, are very happy about it. This year Meyers’ strawberries were in bloom, and his lettuce, onions, parsley, celery, broccoli, rosemary, peas, turnips, cauliflower, beets and more were all taking off. Meyers ended by saying, “If we built just a couple more farms up here, we could be feeding the state of Alaska in no time at all.” 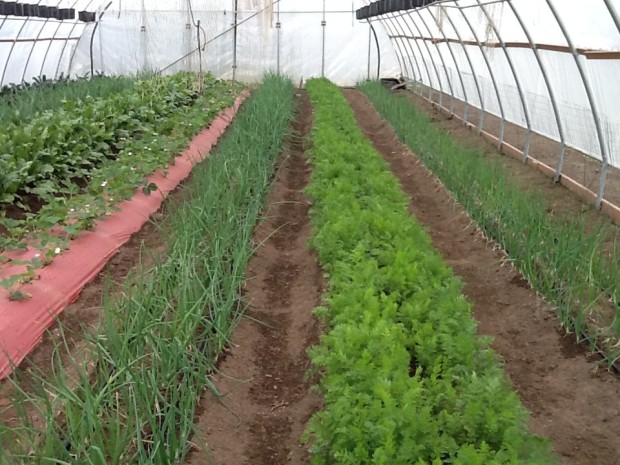 Meyers bought two more Gro-Max Gothic Style High Tunnels through grants the NRCS’s provides to farmers under the 2015 EQIP Seasonal High Tunnel Initiative, which was started in order to help farmers lengthen the growing season. Meyers said, “I asked my National Account Manager about the NRCS program, he sent me the paperwork and the rest of it was easy.” Meyers recommended Growers Supply for anyone interested in purchasing high tunnels through the initiative. Meyers expressed, “Rather than having to seek out my local NRCS office, my National Account Manager supplied me with the proper paperwork right away, helping me get the process started right away.”