Into the West with FarmTek’s Fodder Trailer

Today’s blog post comes from our fodder specialist Ken Erha. Ken travels across the country with our fodder trailer to attend trade shows and events. He went into the west for events in Idaho, Utah and Colorado to spread the word about hydroponics and fodder, and came back with a story to tell. 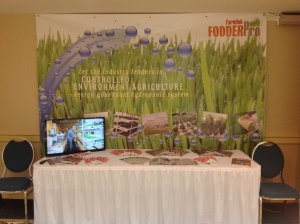 WODPA Fall Conference and Organic Trade Show
Our tour began at the Western Organic Dairy Producers Alliance Fall Conference and Organic Trade Show in Twin Falls, ID. This two-day event was a great way to begin the tour.
Organic farmers and vendors from across the U.S. gathered to learn about the latest in organic farming from a variety of producers and prominent agriculture speakers. And of course – hydroponic fodder fit in perfectly, as it is a trend that has been gaining popularity, especially among organic farmers. Attendees visited our trailer between sessions and they were delighted that we were there. Everyone was very impressed with the fodder and lettuce we were growing right there in the trailer. Many at the event knew about FarmTek and had heard about hydroponic fodder. It’s something that they were really excited to see firsthand and learn more about. 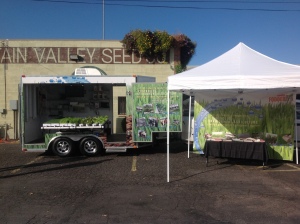 The next stop was at a wonderful family-owned seed company in the heart of Salt Lake City, UT, Mountain Valley Seed Co. With the beautiful back drop of the picturesque Rocky Mountains in the distance, we set up right outside the door as their customers happily approached wanting to know what we were all about. We had visitors from nearby farms who knew we would be there and were anxious for our arrival. They wanted to see an operating fodder system up close and personal and speak to us about the solutions FarmTek could provide for their farms. The idea of saving money on feed for their livestock brought many people to the trailer, but they didn’t realize the full potential of growing with hydroponics until they saw it for themselves. Many who stopped by interested in fodder because interested in hydroponics as well when they saw the hydroponic lettuce we had growing alongside the fodder. Those who stopped by were eager to get as much information as they could about fodder and hydroponics and to learn about how they could get started with their own system.

Our next destination was Colorado. We had two stops in the state and hundreds of people came to see our trailer and speak to us on the trip.

The first stop was at Northeastern Junior College in Sterling, CO. Many of the colleges agriculture students gathered to hear our presentation and work with our fodder and hydroponic systems. It was great to have the opportunity to speak to the next generation of agriculture professionals. Both the students and professors were had many questions and were engaged throughout the event. Since education is such an integral part of the success of our controlled environment agriculture systems, we were really excited about how receptive they were to our visit.

Narrow Way Ranch
Our last stop was at Narrow Way Ranch in Yoder, CO. Despite the frigid weather and tornado-like winds, this stop was one of the best. The Delbridges are a customer of ours and they already have a few of our FodderPro Feed Systems, but their neighbors and friends have been so interested, they asked us to stop by and give a presentation.

Since the weather was not on our side and no one wanted to stand in the cold, we gave our presentation inside the Delbridge’s fodder room. They were more than accommodating and people really benefited from seeing how a fodder room was set up.

All in all, the western swing of our trailer was a huge success. We built the fodder trailer because we believe there is no substitute for a face-to-face conversation and a hand shake. We want to help farmers across the country and teach them about fodder and hydroponics, and how controlled environment agriculture can help them save money and become more self-reliant.

If you’re interested in seeing our trailer, visit www.FodderSystems.com to see where we’ll be next!