Spotlight on Texas Triffid Ranch—Interview with a Mad Horticultural Scientist

This post is brought to you by guest author, Emily Goldsher. Emily is a communications strategist living in New York City.

If you think you know everything there is to know about growing, you’re wrong. If you think you’ve seen it all—every plant, every flower and every crop—The Texas Triffid Ranch is about to prove you haven’t. Run by former science fiction writer Paul Riddell, The Texas Triffid Ranch specializes in “Odd Plants and Oddities for Odd People.” For the folks that work with and buy from Riddell, odd specifically means carnivorous and otherwise exotic plants—not exactly the normal greenhouse fare!

I had a chance to catch up with Riddell about The Texas Triffid Ranch and I think you’ll find the resulting conversation quite interesting. Read on to check out Riddell’s tips and tricks for growing carnivorous plants and how he ended up a horticultural mad scientist:

Well, in the fall of 2002, I took a short-lived job in Tallahassee, Florida and made a lot of friends studying at Florida State University and working at the Tallahassee Museum. It was at the latter that I came across my first North American pitcher plants (Sarracenia spp.) in the wild, and became hooked right on the spot. The position ended when the company re-organized, but I moved back to Dallas and started conducting research. It’s been all downhill from there.

Does your background in science fiction have a lot to do with your crop choices?

Well, yes and no. One of the reasons I quit writing about science fiction was far too many fans were too busy hyperfocusing on their favorite authors and shows and deliberately ignoring what my friend Dave Hutchinson likes to call “a sensawunda.” However, enough friends still in the business, particularly ones writing for it, have a hyperfocused sense of wonder and they were an incredible encouragement in the early days, because they wanted to know more. 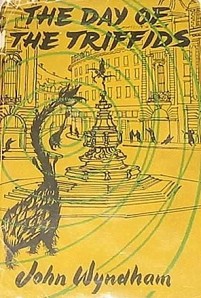 When people who knew me back in my writing days ask why I gave it up for horticulture, I bring up triffids. For those unfamiliar with the term, it’s a reference to the classic John Wyndham novel Day of the Triffids, published in 1952. Pretty much every post-apocalyptic novel and movie made since then owes a little bit to Wyndham, as do movies ranging from “Night of the Living Dead” to “28 Days Later.” The conceit of the novel was that Soviet horticulture had developed an incredible vegetable oil that made all others obsolete. The plant from which the oil derived was a carnivore that also carried a venomous sting that could kill larger prey. Triffids could also communicate with each other, and they could even pull up their roots and walk from place to place. They weren’t a threat, and in fact were a half-forgotten novelty, until a worldwide meteor storm left everyone viewing it permanently blind and the triffids suddenly had the decisive advantage.

Now, while the triffid is fictional, a lot of its components turned out to exist in real life. Many plants communicate with each other, sometimes across species boundaries, via pheromones or via chemical signals passed through symbiotic fungi. The triggerplants (Stylidium) of Australia can snap pollinating insects with a column that whips forward faster than the human eye can follow and some can strike hard enough to draw blood. Dodder plants can smell tomatoes or other plants that it can parasitize and ignores ones it can’t. Banyans, bladderworts, blackberries…plants can move and move well, even if humans don’t notice it. Compared to some of the real-life strategies used by plants for locomotion, fertilization and reproduction, the triffids are a little quaint. 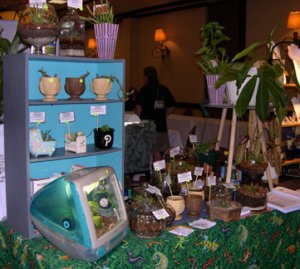 Back to the science fiction issues, I regularly show plants at science fiction conventions in order to reach new people also in need of some of Dave Hutchinson’s “sensawunda.” At my first show, an attendee sneered, “Whoever heard of plants at a convention?” Now, I have regular customers who rush in on Friday evening to see what new plants I have and snag them before anyone else can get them. (My only regret is that science fiction, and by extension its fans, are way behind the times when it comes to botany. A friend of mine makes soap and she’s as sick to death of being quoted the film “Fight Club” as I am of being quoted “Little Shop of Horrors.”)

What soil and watering options are best for carnivorous and otherwise exotic plants?

The absolutes with carnivores, with a couple of rare exceptions, which most growers will never see, involves growing medium and water quality. Carnivores capture insects and other animal prey for nitrogen and phosphorus, allowing them to grow in very low-pH soils where their carnivory gives them a strategic advantage. This means that standard growing mixes are not only useless, but lethal to most carnivores. Most carnivore growing media are a varying percentage of sphagnum peat moss, both milled and long-fiber, and high-silica sand. The latter can be a problem, because the quality of many sands varies from batch to batch and one supplier with exemplary sand can then produce a batch that is so contaminated with fresh-water shell fragments and bits of limestone that it’s deadly to carnivores.

Water quality is also very important, as far as mineral content is concerned. Most of your more famous, and more popular, carnivores come from boggy areas with regular rains and very soft groundwater. This can be a problem out here, where Dallas municipal water is best described as “crunchy.” In my case, I exclusively use captured rainwater for my carnivores; the only exception being during last summer’s Drought of Record, where I had no choice but to use reverse-osmosis filtered water. Anyone living in an area where they can use municipal water on carnivores should cherish it, because that’s pretty much impossible over all but a few areas of Texas.

Next week we will conclude our conversation with the horticultural mad scientist when he answers these probing questions:

You are something of a horticultural mad scientist―would you care to explain the “Kareds” concept?

Do you think that not coming from a horticultural background is what drives you to expand past just growing and growing-related projects?

How has social media been helpful?

Where do you source most of your materials and supplies from?

Do you have any tips for people looking to grow their own carnivorous or exotic plants?

What about someone looking to care for carnivorous and exotic plants?